The Takasago - a Noh Play

from the open source site:

A History of Japanese Literature by W.G. Aston 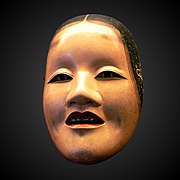 Chorus:  (chants in nearly regular metre),
"Now for the first time he ties the lace of his travelling garb;  His goal is distant many a long day's journey."

Tomonari: (speaks in prose)  "Now, this is I, Tomonari, guardian of the shrine of Aso, in the province of Higo, in Kiushiu. Never having seen the capital, I have now made up my mind, and am going up to the capital. Moreover, I wish to take this opportunity of viewing the bay of Takasago, in Harima."

Chorus: (chants)  "Today he has made up his mind, and has donned his travelling raiment for a journey to a distant goal--the capital.  With waves that rise along the shore, and a genial wind of spring upon the ship-path, how many days pass without a trace of him we know not, until at length he has reached the longed-for bay of Takasago, on the coast of Harima."

Old Man and Old Woman (chant): "The wind of spring that blows through the fir-tree of Takasago has gone down with the sun; the vesper bell is heard from the Temple of Onoye."

Old Woman:  "The waves are hidden from us by the mist-enshrouded rocks."

Both:  "There is naught but the sound to mark the rise and fall of the tide."

Old Man:  "Whom can I take to be my friend? Except the fir-tree of Takasago, my ancient comrade, there is none ot converse with me of the bygone days on which are ever-gathering white snows (of forgetfulness). I grow older and older, accustomed to hear nothing but the wind in the fir-tree either when I rise or go to sleep in my nest of an aged crane, where the night-long moon sheds its rays, and the spring sends down it hoar-frosts. So I make my own heart my companion, and thus give utterance to my thoughts.?

Both:  "Let us sweep away the fir-needles that lie beneath the tree, sleeve touching sleeve of our garments, whereon rest fallen leaves shaken down by the shore-wind asking their news of the firs."

Tomonari: (spoken) "While waiting for some of the villagers to appear, an old man and an old woman have come hither. I pray you, old people, permit me to ask you a question."

Old Man: "It is I whom you address? What is it you desire to know?"

Tomonari: "Which is the tree tha tis called the fir-tree of Takasago?"

Old Man: "This very tree whose shade we are cleansing is the fir-tree of Takasago."

Tomonari: "The phrase "growing old together" is used of the Takasago and the Suminoye fir-trees. But this place and Sumiyoshi (the same as Suminoye) are provinces distant from one another. How then can they be called the fir-trees which "grow old together"?"

Old Man:  "As you have deigned to observe, it is stated in the preface to the Kokinshiu that the fir-trees of Takasago and Suminoye make us feel as if they were growing old together. However that may be, here am I, an old man, who belong to Sumiyoshi, in the province of Settsu, while the old woman here is of this place. Be pleased to tell me, if you can, how that may be."

Tomonari: (in verse). "Strange! I see you old couple here together. What mean you then by saying that you dwell apart, one in distant Suminoye, the other in Takasago, divided from one another by seashore, hill, and province?"

Old Woman (in verse): "What an odd speech! Though many a mile of mountain and river separate them, the way of a husband and wife whose hearts respond to one another with mutual care, is not far apart."

Old Woman: "There is Suminoye"

Old Man: "And there is Takasago"

Tomonari: "The fir-trees blend their hues."

(Here the chorus strikes in with a canticle which is chanted as the indispensable accompaniment of every regular Japanese wedding, and is one of the best known passages in Japanese literature. Figures represetnting the two old folks under the fir-tree with brooms in their hands are, on such occasions, set out on a sort of tray. This is a favourite subject of the Japanese artist.)

"On the four seas still are the waves;
The world is at peace: soft blow the time-winds,
Rustling not the branches.
In such an age blest are the very firs,
In that they meet to grow old together.
Vain indeed are reverent upward looks;
Vain even are words to tell
Our thanks that we were born in such an age,
Rich with the bounty of our sovereign lord."

Old Man:  "I hear the sound of the bell of Onoye, in Takasago."

"The dawn is near, and the hoar-frost falls
On the fir-tree twigs;
But its leaves' dark green suffer no change.
Morning and evening beneath its shade.
The leaves are swept away, yet they never fail.
True it is that these fir-trees shed not all their leaves;
Their verdure remains fresh for ages long,
As the Masaka trailing vine;
Even amongst evergreen trees---
The emblem of unchangeableness---
Exalted is their fame as a symbol to the end of time---
The fame of the fir-trees that have grown old together."

Tomonari:  "and ye who have made known the bygone story of these ancient firs whose branches have indeed earned fame--tell me, I pray you, by what names are ye called."

Old Man and Old Woman: "Why conceal it longer? We are the spirits of the fir-trees of Takasago and Suminoye that have grown old together, manifested under the form of a married pair."

"Wonderful! A miracle wrought by the fir-trees of this famous place!"

Old Man and Old Woman:  "Plants and trees are without souls--"

"Yet in this august reign--"

Old Man and Old Woman: "Even for plants and trees--"

"Good it is to live for ever and ever in this land
Of our great sovereign, under his rule.
to Sumiyoshi, therefore, he would now take his way
And there wait upon [the god].
He embarks in a fisher's boat that lies by the beach, where the waves of evening roll,
And spreading his sail to the favouring breeze,
Puts out into the deep,
Puts out into the deep.

Tomonari:  "From Takasago I set sail in this skiff that lies by the shore,
And put forth with the tide that goes out with the moon.
I pass under the lee of Awaji's shore,
I leave far behind me Naruwo,
And now I have arrived at Suminoye."

(the god of Sumiyoshi appears, and enters into a poetical dialogue with the chorus.)

"We give thanks for this manifestation;
Ever anew we will worship thy spirit with sacred dance
By Sumiyoshi's pure moonlight.

And now, world without end,
The extended arms of the dancing maidens in sacerdotal robes will expel noxious influences;
Their hands folded to rest in their bosoms will embrace all good fortune;
The hymn of a thousand autumns will draw down blessings on the people,
And the song of then thousand years prolong our sovereign's life.
And all the while,
The voice of the breeze,
As it blows through the firs
That grow old together,
Will yield us delight."